The native token of Compound which is the COMP, or as it is usually displayed COMP/USD, is a newcomer to the cryptocurrency market, being introduced on June 15 2020, which means that it is less than a year old. Compound itself also started life a few years ago, back in 2017 and became an interesting blockchain protocol for the DeFi world of the crypto market. That became evident when the COMP coin was launched in June last year; it became the leader of the decentralized finance DeFi world in just a single day, a position it still holds.

COMP/USD surged nearly $100 in the first day of the release and the surge continued higher, taking this new token to $427 in a few days. But, as used to be the case with most digital currencies until late 2020, COMP/USD retreated back down and fell to $82 by the beginning of 2020, when the surge in the crypto market was beginning. Compound joined the crypto part on January this year and surged above $500. After the large retreat in the crypto market, COMP/USD has surged back up and remains bullish, but buyers need to break above $600 for the bullish momentum to continue, which I’m sure it will, as this market attracts more and more attention by the day.

Recent Changes in the Compound Price

In short, Compound is a decentralized lending application. Holders of a number of supported cryptocurrencies can lend in this application, while others can borrow these digital currencies.  The Compound protocol is developed on the Ethereum blockchain, which is the main backbone of DeFi. As we mentioned above, COMP token took the DeFi market by storm, which means that the expansion of this market will increase the demand for lending and borrowing, thus increase the demand for Compound. This new market has just started and looks very promising, so the future looks good for Compound and the native token COMP.

Since mid-February we have seen some heightened volatility for COMP/USD and the crypto market in general, which has gone both ways, suggesting that cryptocurrencies have become overbought for the moment, however, the dips have been bought quite aggressively nonetheless, which also shows that the buying pressure remains strong. Compound has formed a bottom at $320-$330 where strong buying pressure has been evident. We have seen another strong surge in the last two weeks, but the resistance at $560-$570 according to my crypto broker feed, has scared the buyers for the time being, so the 2-way price action continues.

Compound Price Prediction for the Next 5 Years

As we have explained in our cryptocurrency price predictions, there have been quite a few interesting cryptocurrencies and block-chain protocols/applications to come along in recent years, such as Basic Attention Coin BAT which acts as a blockchain bridge between the digital producers and consumers, TRON and ChainLink which offers the decentralized oracle network. Compound is another interesting idea to has come across in recent years, helping make Decentralized Finance more popular among the broader public. Compound is a lending and borrowing decentralized blockchain protocol. You can also have a say in the Compound governance and decision making if you own the native coin COMP.

As we know, there are many financial services besides the basic payments, like borrowing or lending for interest, insurance, savings, taxes etc. Decentralized finance aims to achieve one thing, to make all financial services decentralized, by using blockchain protocols and digital coins. Compound has settled well in this new DeFi environment, particularly the second stage with its lending and borrowing pools.

Compound basically offers a number of decentralized pools, which act as compound for crypto holders who would like to lend them to other people in need of such cryptos. These could be normal people who would like to use cryptos for payments, or as the surge in demand has indicated, they could be traders or investors, hoping that these cryptocurrencies will increase in value more than the interest they will have to pay. Obviously, the lenders earn interest from the borrowers and vice versa. But this is not all. You get cTokens when depositing cryptos in Compound pools or Compound wallets, for Ethereum you get cETH , for Basic Attention Coin you get cBAT etc and the interest you earn is in the deposited coins as well. You can earn interest according to the cToken which act as loan collateral, but at the same time, you can spend the cryptos as well until the minimum collateral amount. The interest is decided by the supply/demand ratio as in all financial institutions. If there are too many lenders and fewer borrowers in a pool, the interest will be lower, although lenders can choose to move to another pool, which has more borrowers than lenders. Likewise, if borrowers want lower interest, they will have to find a pool where there are more lending funds than borrowing demand.

After three years of running as an application/protocol on the Ethereum network, Compound decided to introduce its own native token, called COMP. COMP/USD started life on June 15 last year, as we mentioned above at around $140 according to our cryptocurrency rates. That showed the increasing interest for DeFi and the COMP coin as a result. The COMP coin confers have voting rights to decide on important things like including new cryptocurrencies for borrowing and lending on the Compound platform, protocol upgrades or in the future, plans are that COMP holders might be able to vote for fee distribution, as well as for token buybacks.

At the moment, the following cryptos are supported in Compound: Basic Attention Token (BAT), Ether (ETH), Tether (USDT), Wrapped BTC (WBTC), Dai (DAI), Sai (SAI), USD Coin (USDC), Ox (ZRX) and Augur (REP). Although, one of the drawbacks for COMP token holders is that they can’t earn interest on the Compound pools, but the right to vote might be more important for some investors. A fixed amount of COMP is distributed to all Compound lenders and borrowers, which happens every 15 seconds, the time needed for an Ethereum block to be mined. The amount of COMP coins is obviously proportional to the interest accumulated by each asset. Every COMP coin represents 1 vote and anyone with 1% of the total COMP supply can submit and vote on proposals to change the protocol. If the community passes a governance change to the protocol, it will take two days to enter into effect, so anyone who has open positions before the changes go into effect can close them if they wish. This aims at keeping Compound entirely self-governing and decentralized.

The decentralized finance DeFi world has been expanding fast in recent year, but in 2020 it exploded, as all traditional assets became too risky to buy and hold, with the increased uncertainty across the globe, due to the Covid-19 and everything that followed. Ethereum is the main skeleton for the DeFi movement of recent years, enabling smart contracts where other decentralized blockchain applications (dApps) which offer a native cryptocurrency can be built.

Compound immediately attracted big names in this new industry as a DeFi new entrance, such as Coinbase Pro which acquired quite a few DeFi governance tokens. Coinbase Ventures funds came from an $8 million seed round, where Andreessen Horowitz of Polychain Capital and Bain Capital Ventures took part as well.

As the platform has gained traction, many other applications have integrated Compound into their offerings. Coinbase Custody and Anchorage both support COMP and cTokens. Since the COMP token was released, several other exchanges have jumped to list it, including Binance, FTX and Poloniex.

Until Compound released its own native token COMP, Maker (MKR) used to be the leader of the DeFi movement, remaining on top since this movement began. But, COMP took the DeFi market by storm, becoming the leader since June 2020 and has remained there since then. As this industry grows, Compound is only set to expand further and the COMP token will follow through, as we will explain in the technical analysis section below.

The Total Volume Locked (TVL) for DeFi was gathering momentum at a great speed in February and passed the amount of $1 billion at the height of the crypto surge. This figure represents the dollar value of assets closed in DeFi contracts and ended the financial year above $13 billion.

Vadim Koleoshkin, the chief operations officer at Zerion which is a DeFi interface provider, thinks that the current COMP hype is due to interest in a new type of share equity. Speaking to Cointelegraph, Koleoshkin believes that the launch of COMP is only the beginning of a broader shake-up in the DeFi space:

“Compound is one of the first Web 3.0 companies that became public, and COMP is cooler than traditional shares because it’s programmable. Tokens do not have yield, but Compound has a chance to become one of the most prominent players in the money market. The ability to participate in the governance of it may, therefore, be valuable.”

“Right now, we see a lot of new users coming in to explore what DeFi has to offer. From our recent findings, many users see DeFi as a viable alternative to services like Binance and Coinbase. Many more governance and DeFi tokens are going to launch soon, and trading venues like Uniswap, Kyber, and Balancer are ready to trade them.”

Technical Analysis – Buyers Are Back in Charge

COMP started life quite recently, in June last year, which means that it missed the first surge in the cryptocurrency market back at the end of 2017. Although as we mentioned above, COMP/USD started surging immediately, with increased attention from the DeFi world which was starting to boom due to the growing global uncertainties. COMP/USD reached $427 in the first week of trading, but came down hard in the second week and by July it ended up at $120. In August we saw a couple of attempts from buyers to resume the bullish trend since the momentum was turning bullish for other cryptocurrencies, but both attempts failed and by November this cryptocurrency ended at $80.

After a doji candlestick on the weekly chart down there which is a bullish reversing signal, COMP started to join the rest of the market in the biggest bullish run ever witnessed in financial markets. The 20 SMA (gray) provided resistance for a while in December, but buyers pushed above it without much trouble in January, indicating the strong rally that was about to come. In the second week of February, COMP/USD reached $560 which means an 800% increase, as crypto volatility increased. The price retreated down eventually as all other cryptos did and in the first week of March we saw another attempt on the upside. But, the next bullish assault would only come after the 20 SMA would catch up with the price later that month. Now the 20 SMA seems to have turned into support on the weekly chart and this crypto looks set to take out the previous highs. 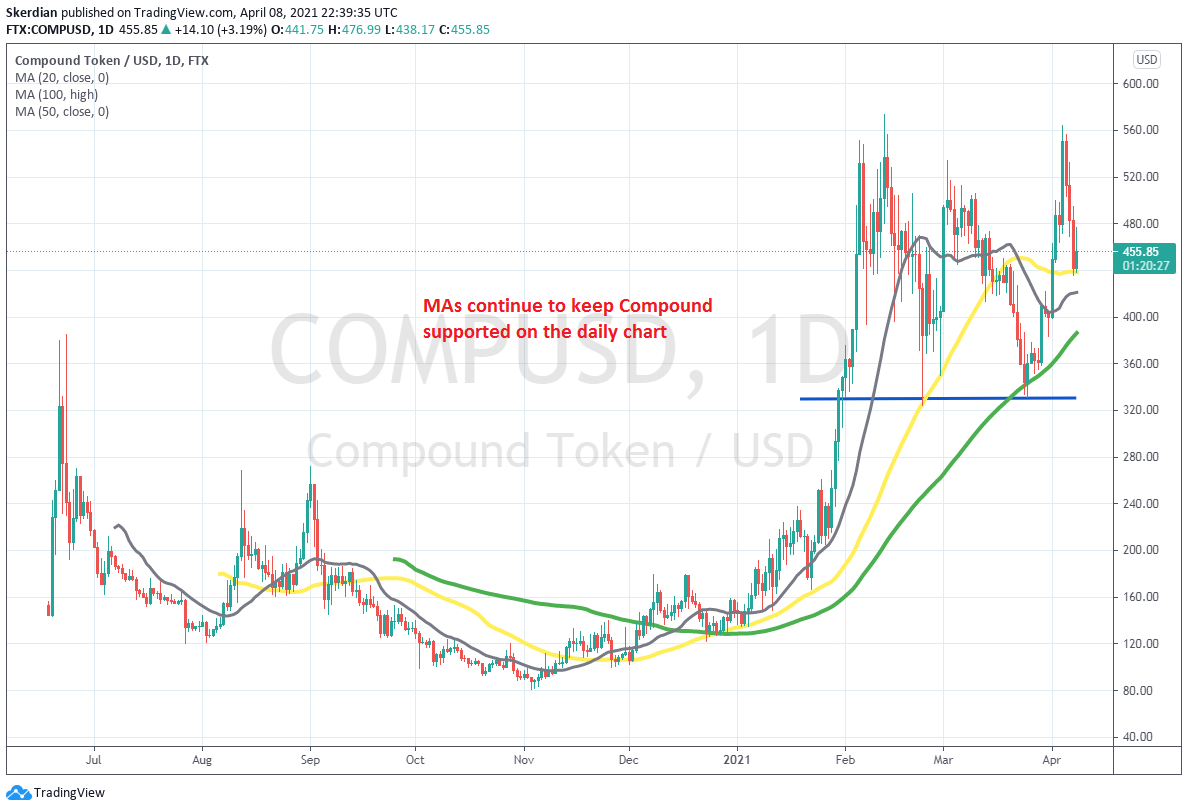 On the daily chart, the 20 SMA was acting as resistance as the price was trending lower, following the surge at the release. But, after the trend started turning bullish in November last year moving averages turned into support, particularly the 50 SMA (yellow). This moving average has been acting as the ultimate support for several months, until the middle of March when it was finally broken. Although, the 100 SMA (green) turned into support, together with the previous low of around $330 which was the low during the previous retrace. Now the price has surged back above the moving averages, so we will see where it will end up this time.