Vehicles move on a snow-capped road in Houston, Texas, the United States, on Feb. 15, 2021. (Photo by Chengyue Lao/Xinhua)

Natural disasters along the Texas Gulf Coast in the US that have disrupted many sectors may mean lagging liquefied natural gas (LNG) purchases by China under the phase one trade deal, Chinese experts have warned, citing the deep freeze’s ripple effect on the natural gas supply/demand chain and commodity prices.

In the aftermath of a winter storm that claimed the lives of at least two dozen people with lingering blackouts and water shortages, US President Joe Biden approved a major disaster declaration for the US state of Texas on Saturday.

More than 78,000 homes remained without electricity as of Saturday morning (US time), and Texas Governor Greg Abbott recently directed Texas natural gas providers not to ship outside the state until Sunday.

Jin Lei, an associate professor at the Beijing-based China University of Petroleum, said the situation in Texas, where most of the exports headed for China are handled, may have some impact on US LNG exports to China, making fulfilling the target less possible toward the end of 2021.

“The impact will be for the short term, although it will likely extend to March or April,” Jin told the Global Times on Sunday.

The LNG exports rely on pipelines that transport the gas from various production areas to a very limited number of US ports capable of handling LNG, which involves the complicated process of turning natural gas into the liquid form.

A disruption in the supply chain may result in missing the target set out in the phase one deal, on top of the pandemic’s negative impact on China’s imports of US LNG in terms of production and transportation, Jin predicted.

According to data on the website of the US Energy Information Administration (EIA), US LNG exports to China go through several terminals, including Corpus Christi and Freeport in Texas, and Sabine Pass in Louisiana, a state that borders Texas.

China ramped up imports of US energy to meet domestic demand starting in the second half of 2020, including several major shipments of crude and LNG.

Under the phase one deal, China agreed to buy $52.4 billion worth of US energy goods over a two-year period based on market prices and commercial considerations. But no specified sum for LNG or crude was mentioned in the phase one deal.

Shipments out of the above terminals to China have been picking up since the second half of last year, according to EIA data. 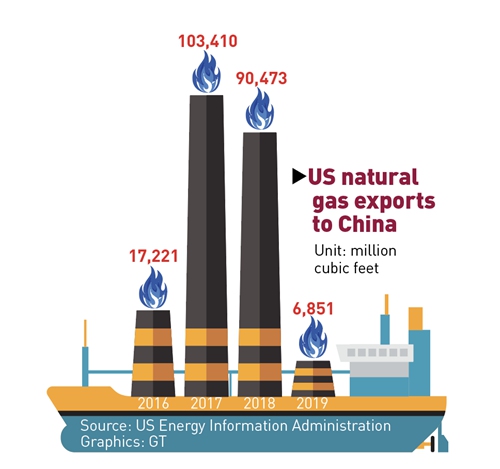 “These figures showed that meeting the target of energy purchases in the phase one deal requires the close cooperation of both countries,” Jin said.

Jin noted that besides power generation, natural gas is also increasingly used in China for powering new-energy vehicles, as industrial feed for the chemical industry, and in making ceramics for construction purposes.

“China does not have a lot of facilities to store LNG, so the fuel has to be purchased on an intermittent basis. The global epidemic situation also determines how much LNG China needs,” Jin said.

However, some also said that the current situation in Texas will have little impact on China’s energy imports.

Lin Boqiang, director of the China Center for Energy Economics Research at Xiamen University, told the Global Times on Sunday that the current situation will for sure send LNG prices higher but on an annual basis, the impact from this bout of extreme weather will be tiny.

Lin believed the $52.4 billion target outlined for energy purchases still stands a good chance of being completed on time and in case it is not, delays caused by the deep freeze should be seen as one of the reasons.

Jin noted that the gap can be bridged to a “certain extent” if China-US trade friction eases in the coming months.

For crude oil, an annual increase of 88 percent was registered for the year, the General Administration of Customs said in January.